Script to find orphaned/unreachable job steps within your SQL jobs

SQL jobs are great as the SQL agent job engine allows for very granular control over jobs that are created by allowing great flexibility with the scheduling, execution, flow actions and notifications. Invariably, when jobs are setup, they just run and run without many problems, but the other day I was called in to look at a problem where a SQL job seemingly wasn’t doing everything that it should be doing, namely the job steps.

After a bit of digging around, I discovered that the flow actions had gone a little bit off and as such some job steps were being missed. When I talk about the flow actions, I’m referring to the ‘On success action’ and ‘On failure action’ settings of the individual job steps.

Now if I was to use SSMS UI to add/update the job steps and configure the On success and On failure actions in such a way that job steps would be missed, I would see this error:

Which is a really useful warning that you really should do something about (unless you intend that behaviour of course!) before saving the job.

However, most of the jobs and job step logic that I implement are scripted and if you modify the job using plain old t-sql, you don’t get a helpful warning if you inadvertently create these unreachable job steps. For example, you could add a new job step to an existing job, but if you don’t modify the previous job step’s success/fail action from ‘Quit job reporting success’ or ‘Quit job reporting Failure’, the new job step may never be executed. And in the case of my problem, I think this is what happened. A new job step was added at the bottom of the existing job steps, but the previous last job step flow on success was not modified to ‘Go to the next step’. It basically looked a bit like this:

So, after fixing the immediate problem I set about creating a script that would check all the jobs within a SQL instance and attempt to detect any jobs that had any orphaned or reachable job steps and came up with the following:

What this does is that it checks all job steps are reachable by either:

What the script doesn’t do is to recursively list all unreachable steps. So for example, if you had a job with three steps, 1, 2 and 3 where step 3 is only reachable by step 2, but step 2 itself is unreachable, then this code will only detect step 2 as unreachable. It won’t detect that step 3 is ‘unreachable’ because of step 2. For sure you could create a query that would give you this information but it’ll be a lot more complicated. The very fact that this script is detecting a job with an unreachable step is good enough for me to investigate further and I don’t need to know which downstream job steps are unreachable.

So to prove the script, I created a job with some crazy logic flows as shown here (the script to create this job and detect the unreachable steps can be downloaded here): 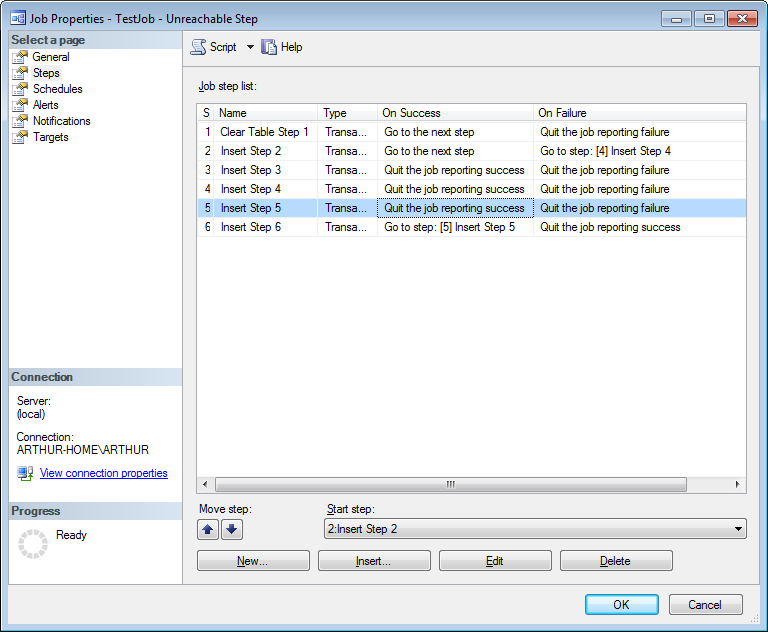 The job is set to start at step 2 and as you can see there are some unreachable steps in there because of the flows. Running the script returns the following:

This website uses cookies to improve your experience while you navigate through the website. Out of these, the cookies that are categorized as necessary are stored on your browser as they are essential for the working of basic functionalities of the website. We also use third-party cookies that help us analyze and understand how you use this website. These cookies will be stored in your browser only with your consent. You also have the option to opt-out of these cookies. But opting out of some of these cookies may affect your browsing experience.
Necessary Always Enabled

Performance cookies are used to understand and analyze the key performance indexes of the website which helps in delivering a better user experience for the visitors.

Analytical cookies are used to understand how visitors interact with the website. These cookies help provide information on metrics the number of visitors, bounce rate, traffic source, etc.

Advertisement cookies are used to provide visitors with relevant ads and marketing campaigns. These cookies track visitors across websites and collect information to provide customized ads.

Other uncategorized cookies are those that are being analyzed and have not been classified into a category as yet.