How to backup a SQL 2012 database directly to Windows Azure

It has been a little while since I posted something and I’ve been meaning to finish off this blog for a few weeks now, but I have been a little busy with the arrival of my 2nd son (and have been distracted by my new Alienware laptop!)… Anyway I recently blogged about how cool I thought the new feature was in SQL 2012 SP1 CU2 which allows you to natively backup/restore databases with Windows Azure Storage. Recently I have been able to set this up with some of the on-premise production databases that I look after and was impressed with how simple it was to setup in a relatively basic form.

Note: This blog is about backing up an on-premise SQL 2012 SP1 CU2 database to Azure. If you are looking to backup an Azure SQL database, then check out the very recent blogs by Jason Strate or Grant Fitchley 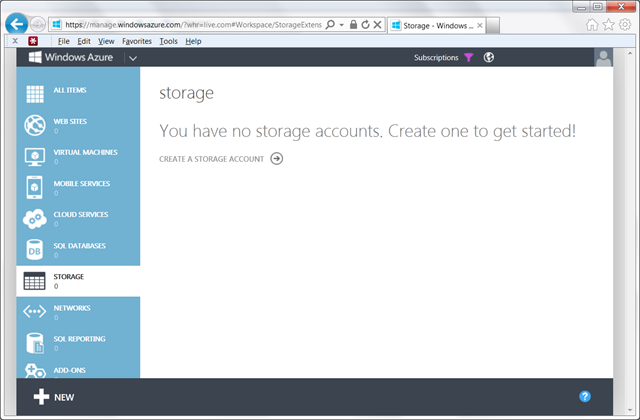 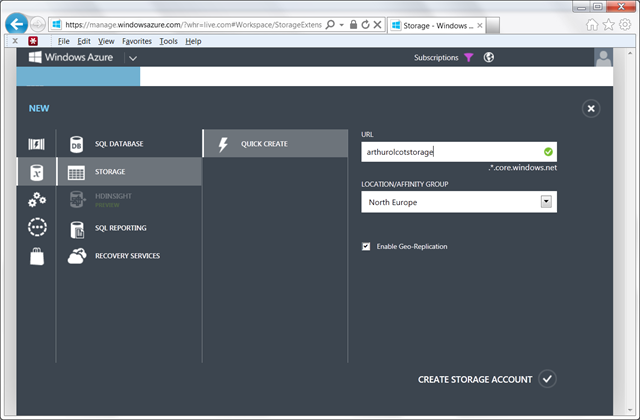 Create a URL and choose the location for the data and if you require geo-replicated data redundancy. Finally click Create Storage Account. Once it has been created which takes a few seconds, you’ll be able to create a container to store those backups 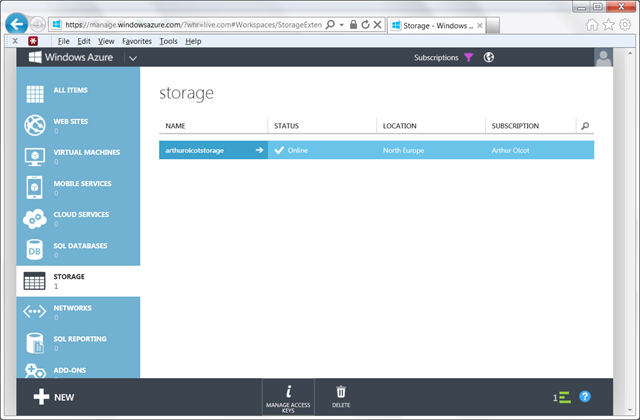 Click on the storage account that you have just created and that will take you to the dashboard. From here you can access some important information that you’ll need later. This is the “secret” access key which you can get by clicking on the Manage Access Keys button. But first we need to create a container to store the files in. 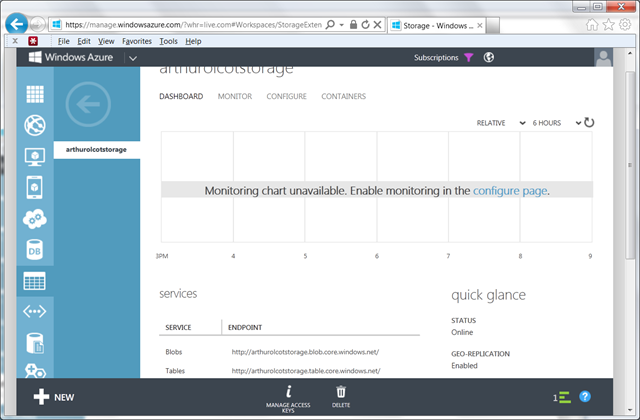 Click on the Containers link and then on Create a Container. Enter a name for the container to store the blobs and then ok. 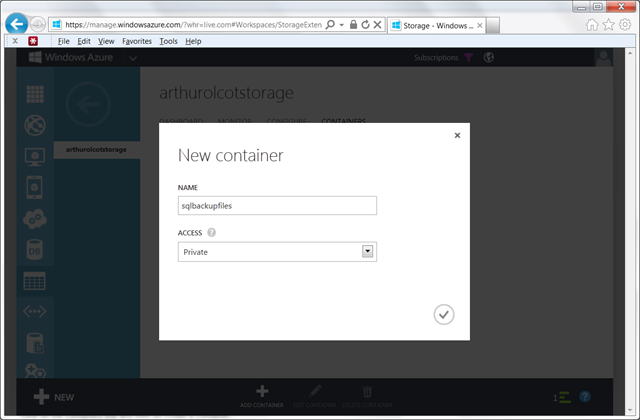 Once the container is created, it will appear along with the URL of the container. You’ll need this URL as part of the backup later on. 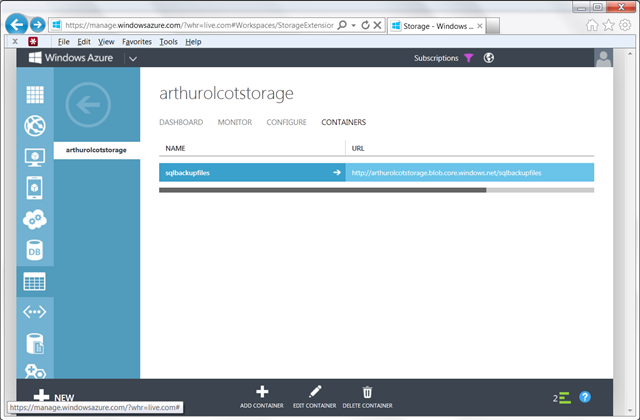 And that is pretty much it from within the Azure portal. Now we can get to work backing up our SQL server databases.

From our SQL server we need to first create a credential. This is what will be used to authenticate with Azure during the backup process. There are two key pieces of information that you’ll need to create the credential. The first is the “IDENTITY”. This is the name of your storage account that you created earlier. The second, “SECRET” is the access key which you can get from the portal as described earlier.

Once the credential has been created you can now perform a backup to Azure. There are some differences compared to traditional backups and some backup options are not supported so you should read up on the differences here. However, in its simplest form you can perform a full backup using something like this:

Here you can see the new destination type of URL which is the URL of your container that you created earlier plus the name of the file or rather blob that you want to create within that container. The other parameter that you need to specify is the credential which is needed to authenticate with Azure. Once the database backup is complete, you will be able to see it in the container

You can have basic backups all setup and working within a few minutes and it all seems to work fairly well. During testing I did have an issue with a backup failing, probably caused by a connection failure from the on-premise server and Azure and this left the lease to the blob locked with no easy way of killing it and i couldn’t delete the file either. I did get it resolved in the end, but it took me a few hours. I’ll blog a bit more about that error in a week or two and what I had to do to solve it.

This website uses cookies to improve your experience while you navigate through the website. Out of these, the cookies that are categorized as necessary are stored on your browser as they are essential for the working of basic functionalities of the website. We also use third-party cookies that help us analyze and understand how you use this website. These cookies will be stored in your browser only with your consent. You also have the option to opt-out of these cookies. But opting out of some of these cookies may affect your browsing experience.
Necessary Always Enabled
Necessary cookies are absolutely essential for the website to function properly. These cookies ensure basic functionalities and security features of the website, anonymously.
Functional
Functional cookies help to perform certain functionalities like sharing the content of the website on social media platforms, collect feedbacks, and other third-party features.
Performance
Performance cookies are used to understand and analyze the key performance indexes of the website which helps in delivering a better user experience for the visitors.
Analytics
Analytical cookies are used to understand how visitors interact with the website. These cookies help provide information on metrics the number of visitors, bounce rate, traffic source, etc.
Advertisement
Advertisement cookies are used to provide visitors with relevant ads and marketing campaigns. These cookies track visitors across websites and collect information to provide customized ads.
Others
Other uncategorized cookies are those that are being analyzed and have not been classified into a category as yet.
SAVE & ACCEPT